There are always at least seven possibilities!

The ethical imperative: Act always so as to increase the number of choices.

Systemic Social Worker, Dipl.-Socialpedagogue, Doctor of Philosophy, Professor for Sciences of Social Work/Systemic Social Work at the University of Applied Sciences in Merseburg/Germany (Merseburg is near Halle and Leipzig). Social worker. Supervisor and Trainer. Author. Born in 1957, two adult children. Living in Halle/Germany (about 150 km south of Berlin).

Systemic means: we always have choices.

… on the subject of „reality“:

… on the subject of change:

… on the subject of people:

… on the subject of systems and theories:

The absolute („all“, „always“, „is“) nature of the wording in the statements does not imply that they are true, rather it conveys the idea that we are dealing with an assumption, a definition that can (not must) be applied in all circumstances.

I believe nothing of my own that I have ever written. I cannot accept that the products of minds are subject-matter for beliefs. But I accept, with reservations that give me freedom to ridicule the statement at any other time, that…

A perfectly realistic map is a useless representation. (p. 2)

sonder, n. the realization that each random passerby is living a life as vivid and complex as your own—populated with their own ambitions, friends, routines, worries and inherited craziness—an epic story that continues invisibly around you like an anthill sprawling deep underground, with elaborate passageways to thousands of other lives that you’ll never know existed, in which you might appear only once, as an extra sipping coffee in the background, as a blur of traffic passing on the highway, as a lighted window at dusk.

We shouldn’t assume that people intuitively hold the apparently deranged or evil views they profess. However, we should take seriously their social goal, namely, to reject the standard groups that make up the majority of society in favor of a fringe coalition. As a result, if we want them to abandon their silly or offensive views, attempting to convince them of these views’ logical, empirical, or moral failings is unlikely to work. Instead, we have to consider how to deal with people who feel their best chance of thriving is to integrate into groups that have been rejected by most of society.

For there is nothing either good or bad, but thinking makes it so.

Here I would like to point to Einstein’s idea that your theory determines what you see. As I see it, there is a lot to be said for the idea that reality is the invention of beliefs.

I attended Yale University, which was ranked at the time as the second most liberal of the Ivy League schools. […] Liberalism seemed so obviously ethical. Liberals marched for peace, workers’ rights, civil rights, and secularism. The Republican Party was (as we saw it) the party of war, big business, racism, and evangelical Christianity. I could not understand how any thinking person would voluntarily embrace the party of evil, and so I and my fellow liberals looked for psychological explanations of conservatism, but not liberalism. We supported liberal policies because we saw the world clearly and wanted to help people, but they supported conservative policies out of pure self-interest (lower my taxes!) or thinly veiled racism (stop funding welfare programs for minorities!). We never considered the possibility that there where alternative moral worlds in which reducing harm (by helping victims) and increasing fairness (by pursuing group-based equality) were not the main goals. And if we could not imagine other moralities, then we could not believe that conservatives were as sincere in their moral beliefs as we were in ours.

It’s Hard to Hate People Close Up.
It’s easy to hate people when we depersonalize them and keep them at arm’s length. But when we get to know them, when their troubles and struggles become real, when we feel their pain as human beings, it becomes much harder to hate.

[As social workers] we endure this world of increasing paradoxes and yet we carry out or daily activities and perform our professional functions. We should, however, not merely endure passively, but also learn to endure actively, to hold amidst adversity and difficulties, to prevail amidst a sea of trouble, to be a hammer rather than anvil, to bear up under such frustrating contradictions and not to be intimidated by the enormity of the problems and crises. Active endurance means substituting hope for despair, persevering rather than giving up, persisting rather than surrendering in the face of difficult odds and helping to sustain our clients, our group members, our constituents, and ourselves through mutual support.

Accepting reality is the first step to insanity.

We are all handicapped.

You don’t have any chance, but just take it!

Reality exists in the human mind, and nowhere else.

If you’re not prepared to be wrong, you’ll never come up with anything original.

The simple understanding that one thing can be another thing is at root of all things of our doing.

I have never seen a problem in my life.
I have only seen talks about problems.

That in the beginning when the world was young there were a great many thoughts but no such thing as a truth. Man made the truths himself and each truth was a composite of a great many vague thoughts. All about the world were the truths and they were beautiful. […] And the people came along. Each as he appeared snatched up one of the truths and some who were quite strong snatched up a dozen of them.
It was the truths that made the people grotesques. The old man had quite an elaborate theory concerning the matter. It was his notion that the moment one of the people took one of the truths to himself, called it his truth, and tried to live his life by it, he became a grotesque and the truth he embraced became a falsehood.

Here’s one example of the utter wrongness of something I tend to be automatically sure of: Everything in my own immediate experience supports my deep belief that I am the absolute center of the universe, the realest, most vivid and important person in existence. We rarely talk about this sort of natural, basic selfcenteredness, because it’s so socially repulsive, but it’s pretty much the same for all of us, deep down. It is our default-setting, hard-wired into our boards at birth. Think about it: There is no experience you’ve had that you were not at the absolute center of.

If you fall on your face, at least you are heading in the right direction.

Having guts always works out.

Objectivity is a subject’s delusion that observing can be done without him. Invoking objectivity is abrogating responsibility, hence its popularity.

Only those questions that are in principle undecidable, we can decide.

The system now means, not a thing, but a list of variables. This list can be varied, and the experimenter’s commonest task is that of varying the list („taking other variables into account“) until he finds a set of variables that gives the required singleness.

… an explanatory principle – like ‘gravity’ or ‘instinct’ – really explains nothing. It’s a sort of conventional agreement between scientists to stop trying to explain things at a certain point.

Everything said is said by some observer.

The truth is that there is no truth.

I’ve always believed that if you’re going to fantasize about something you shouldn’t waste your imagination trying to make it realistic. If you want realism, you should be out doing it, not sitting there dreaming about it.

Power, meaning ‘ability, whether physical, mental, or moral, to act,’ has become an evil word, with overtones and undertones that suggest the sinister, the unhealthy, the Machiavellian. It suggests a phantasmagoria of the nether regions. The moment the word power is mentioned it is as though hell had been opened, excluding the stench of the devil’s cesspool of corruption. It evokes images of cruelty, dishonesty, selfishness, arrogance, dictatorship, and abject suffering. … Power, in our minds, has become almost synonymous with corruption and immorality. […] To know power and not to fear it is essential to its constructive use and control. In short, life without power is death; a world without power would be a ghostly wasteland, a dead planet!

These rescuers in Rwanda, like the other courageous resisters, rejected culpability to injustice when they refused to pretend ignorance. They did not accept the common rationale that they were powerless to intervene to save others.

Never doubt that a small group of thoughtful, committed citizens can change the world. Indeed, it’s the only thing that ever has.

In theory there is no difference between theory and practice. In practice there is.

Each family, individual, or couple shows a unique way of attempting to cooperate, and the therapist’s job becomes, first, to describe that particular manner to himself that the family shows and, then, to cooperate with the client’s way and, thus to promote change.

Our job ist to make them shine.

“A variety of thoughtful answers to thoughtless comments”, Workshop on the 10th Conference of the European Family Therapy Association, „Visible and Invisible: Bordering Change in Systemic Family Therapy“, Naples/Italy, September 11-14, 2019

“A myriad of smart responses to rude comments”, Workshop on the European Association of Schools of Social Work (EASSW) Congress „Meanings of quality of social work education in a changing Europe“, Madrid/Spain, June 4-7, 2019

“Humans, Rights and Us – Social Work Provides Strategies”, Workshop on the European Association of Schools of Social Work (EASSW) Congress „Meanings of quality of social work education in a changing Europe“, Madrid/Spain, June 4-7, 2019

„How Do I Manage Cultural Diversity … With Right-Wing People, Nazis, Brexiteers and Trumpians?”, Presentation, York/England, March 15, 2019

“Team counselling and supervision in institutions and/or foundations”, Workshop for the Systemic Association of Northern Greece, Thessaloniki, September 30, 2017

“A Diversity of Possible Responses to Simple-Minded Remarks” Workshop on the Seventeenth International Conference on Diversity in Organizations, Communities & Nations, Toronto/Canada, July 26-28, 2017

„Power as a Helpful Metaphor“ Workshop at the EFTA 2016 Conference „Origins and Originality in Family Therapy and Systemic Practice“, Athens/Greece, Sept 28 – Oct 1, 2016

„Systemic Practice“, a three days workshop at the international Student Conference at the Babes-Bolyai-University Cluj-Napoca/Romania, May 6-8, 2003

„Let’s Talk About Success! – Six Arguments and a Guide How to Do It“, Workshop at the IV. European Family Therapy Congress, Budapest/Hungary, June 28, 2001

„Let’s Talk About Success! – Six Arguments and a Guide how to do it“, Workshop at the XII. World Family Therapy Congress, Oslo/Norway, June 15, 2000

Also Workshops and Seminars on…

„The Power of Social Work(ers)“

“How You Can Enjoy Your Work With Difficult Clients“

Johannes Herwig-Lempp (2014), Systemic-Constructivist Research Means To Me…, [English version of a contribution to the website http://www.systemisch-forschen.de/was_ist_systemische_forschung [systemic research – what is systemic research] from 2010/2014]

See the presentation on Vimeo

Interview by Hannah Gutberlet, student at the Hochschule Merseburg, in November 2017, for the tv-program of the University of Merseburg 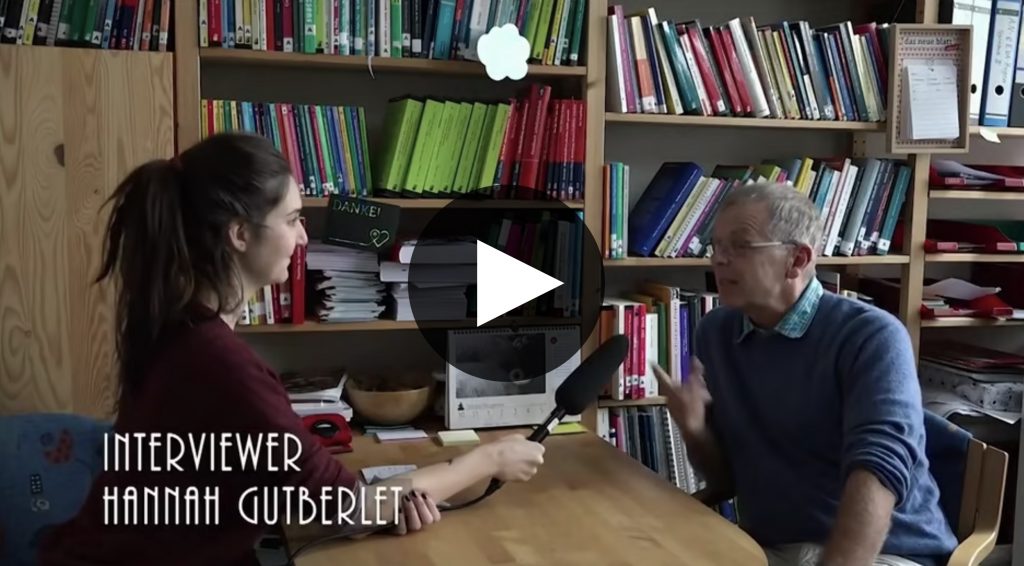 See the interview on Vimeo